Ni Hao! On 13 March 2014, we started our journey to explore Eastern China after booking the AirAsia X FREE flight tickets to Hangzhou, China under the AirAsiaGo.com package. The last time I visited China was back in 2006 with my mum on a holiday-tour package to Beijing, Tianjin and Chengde during winter.


For this trip, we (myself and Camel) took an early morning flight from Kuala Lumpur (LCCT) to Hangzhou and here’s what we did for our entire 8-days journey (13 March - 21 March 2014) in Eastern China:  <Hangzhou – Shanghai – Suzhou – Wuzhen – Hangzhou>

Hangzhou, an old Chinese saying goes, "In heaven there is paradise, on earth there's Hangzhou". When Marco Polo visited China in the thirteenth century, he remarked Hangzhou as the most beautiful city he'd ever seen. This place is described as an earthly paradise where one needs to do nothing but to take a walk in the scenic village path and listen to the moving love stories beside the West Lake (Xihu), a UNESCO World Heritage Site. Our first destination upon arrival was West Lake (Xihu). Apart from going to Hangzhou's scenic West Lake, taking beautiful walks at the roads along the West Lake, and trying out Hangzhou delicacies, another must-do things in Hangzhou is to watch the hugely popular "Impression of West Lake" show staged entirely upon the lake itself & directed by Zhang Yimou who developed the opening and closing ceremonies of the 2008 Summer Olympics in Beijing. I had seen pictures of it but it was nothing compared to the real sight. The lake itself was huge, and you could see layers and layers of mountains surrounding it. 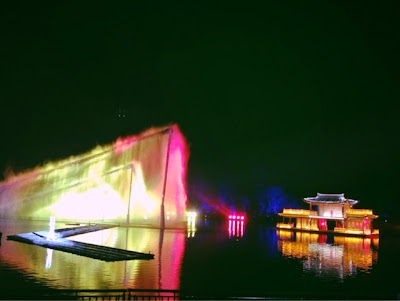 Impression of West Lake - A must-see show in Hangzhou

Shanghai was our second stop for our trip. It was cool and windy in Shanghai during the month of March. We took the high-speed "G" train to travel between Hangzhou and Shanghai, which took only 1 hour ride between Hangzhou Railway Station and Shanghai Hongqio Station. Our trip in Shanghai started with Yuyuan Garden, located in an old town which is famous for its ingenious layout and delicate architecture. The treasure of the garden, Yu Ling Long (an exquisite jade stone), an artificial hill, is considered as one of the three most well-known peaks in Southern China.  The city of Shanghai can be easily accessible via various metro trains and public buses. 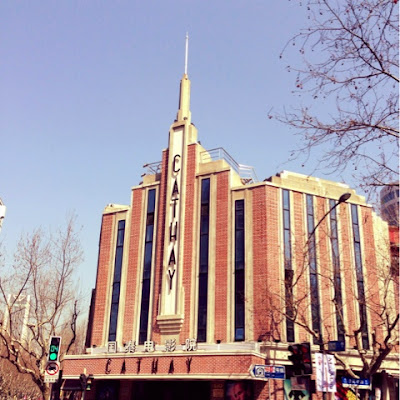 An old Cathay cineplex in Shanghai

The Giant Dumpling Soup filled with tasty soup that requires straw to sip in at Nan Xian ManTou Dian in the heart of Yu Yuan Garden is definitely a must-try for all travelers.

Later in the late afternoon, we took time to explore The Bund (which we visited twice in our trip to Shanghai), famous for its colorful neon signs on the skyscrapers on the eastern bank of Huangpu River while warm yellow and silver lights on the Gothic-style buildings on the west. Later in the evening, we headed to Nanjing Road, the main shopping district in Shanghai, and one of the worlds busiest pedestrian streets. 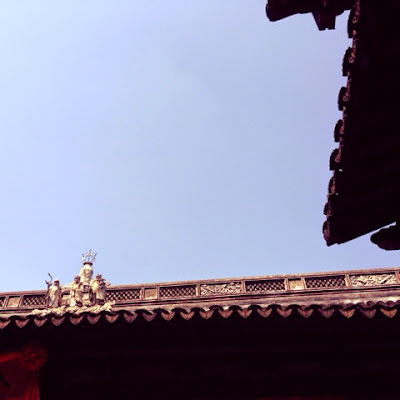 Am I a religious architecture person in general? ;)

For the Suzhou day-trip, we took a morning bullet train from Shanghai to Suzhou, a UNESCO World Heritage Site. Many classic buildings were seen here. Suzhou is well-known for its beautiful gardens, girls and silk factories. Upon arrival, we visited the Lion Forest Garden, (also known as the Kingdom of Rockeries), a famous Yuan-Dynasty Garden in Suzhou followed by a boat trip along the Grand Canal and get close to the world's oldest and longest canal. Later on, we visited  Tong Pak Fu Garden and followed by the Temple of the North, a Buddhist temple with a 7-storey pagoda where we walked all the way to the top for the great views of Suzhou.
Planning a trip to Wuzhen Water Village can be quite confusing. This ancient water village is divided into 2 main zones - the East Zone (Dong Zha) and the West Zone (Xi Zha). The East Zone has many old residences maintaining their original appearance while the West Zone is mainly developed for visitors with accommodation is also available there. To enter the Wuzhen Scenic Zones, visitors need to purchase an entry pass which cost about 120RMB/pax/single entry (which also covers return ferry rides) for 1 scenic zone.

For this trip, we bought the Xi Zha (West Zone of Wuzhen) entry pass. We were told that the West Zone (Xi Zha) is quieter and is more spacious with a good number of side alleys, small bridges, balconies, ancient docks and secondary waterways, which makes it a fascinating place to stroll around. The area is actually not that big so you can see most of it in just 1-day.
To enter the West Zone (Xi Zha), we took a short ferry ride across a man-made lake from the main lobby (where we bought our entry pass). The streets of West Zone (Xi Zha) are lined with guest houses, restaurants, bars and souvenir and arts and crafts shops. Our Guesthouse is also located at the West Zone (Xi Zha) and it is run by a landlord with his/her family members. The Guesthouse was pretty basic but it was built in the local style and our bed was carved from antique wood and comes with heavy morning breakfast.

Not-to-be-missed in Wuzhen:  We wandered along the winding streets and bridges that crossed over the many canals during day time (before the sun sets) and during night time when the village is tastefully lighted.

Hangzhou was our first and last major stop of our trip to China. I'd say we were lucky enough that we were greeted by sunshine and clear skies when we arrived here at the most cherished cities in China. The best site in Hangzhou is definitely the gorgeous West Lake (Xihu). The view was amazingly beautiful and has plenty of photogenic spots that we took advantage of. We took time and walked along the Su Causeway, in which we had a great view of the Leifeng Pagoda. During the evening, we went over to Hefang Street night market where we found all types of tasty sweets and delicacies being sold. I really found Hangzhou to be my favourite spot of our entire China trip. It was truly beautiful, relaxing and breathtaking. Aww, I miss the calmness of West Lake! 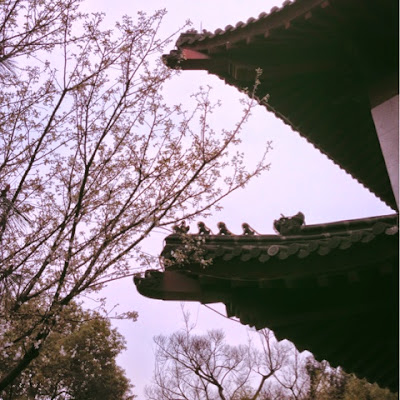 Temple roof - "I maybe small, but I am a guardian angel"

SHANGHAI - SUZHOU
How to get there: Took high-speed train from Shanghai Railway Station - Suzhou (approx. 26 minutes)

Impression of West Lake - A metropolitan outdoor performance on a natural stage setting directed by Zhang Yimou and other famous directors. The soundtrack earned the nomination of the 52nd Grammy Award. 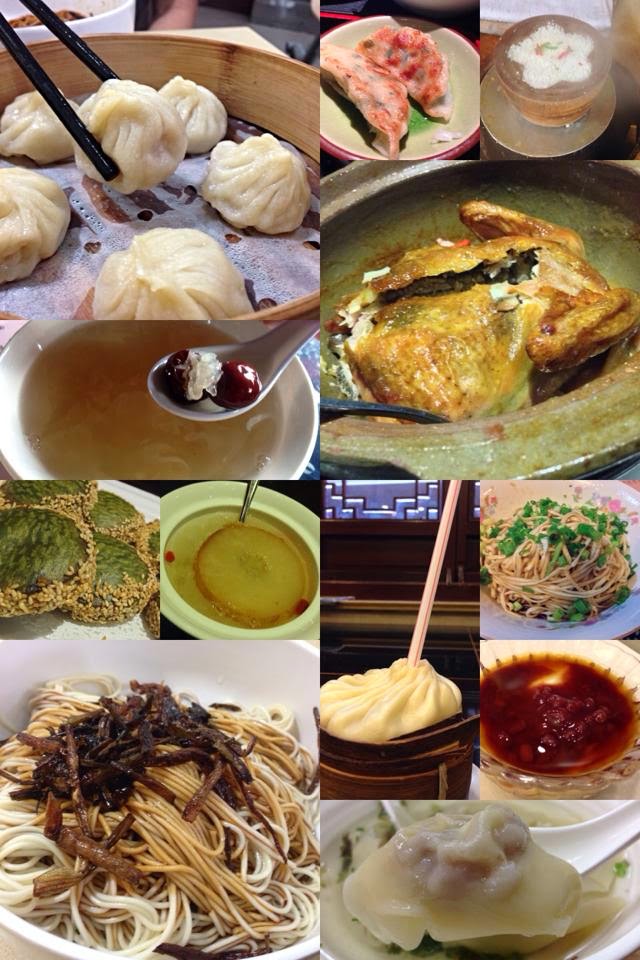 “Travel is never a matter of money but of courage.  I spent a large part of my youth traveling the world as a hippie. And what money did I have then? None. I barely had enough to pay for my fare. But I still consider those to have been the best years of my youth.The great lessons I learned has been precisely those that my journeys had taught me” - Paulo Coelho

Welcome to Small World! This blog allows me to share my travel experiences with others in a straightforward and far-reaching way. I often made great use of other peoples travel blogs and websites every time I plan for my travel trips as they often contained most updated information and invaluable resources from their past travel experiences.
I really hope that you will find every piece of information contained within my blog
handy and useful for your upcoming trip.The writer is a passionate traveler who enjoys speaking to young keen travelers about the freedom to get cultured and to taste the fullness of life. Feel free to contact the writer if you need any travel guidance or tips or if you have any burning questions with regards to your upcoming trip/ journey
- Be inspired but more importantly be inspiring -
Posted by Chengy Wong at Monday, April 28, 2014 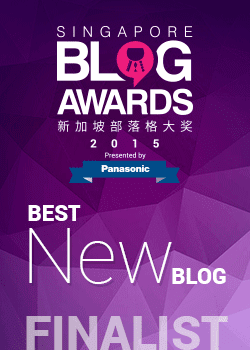